The Civil War affected nearly family in the nation, from the poorest farmer to the residents of the White House.

Benjamin Hardin Helm was born in 1831. In 1856, he married Emile Todd, a member of the prominent Todd family of Kentucky. In this marriage, he became the brother in law of an aspiring lawyer and politician in Springfield, Illinois: Abraham Lincoln. When the Civil War broke out in 1861, Abraham Lincoln, now the President of the United States, offered his young brother in law a position in the U.S. Army. Helm declined, and instead began raising a unit for the Confederate Army. Helm would not only fight against his country, but against his family.
By the Battle of Chickamauga, Helm commanded the Orphan Brigade of Kentuckians in the Confederate Army of Tennessee. On September 20, 1863, he led his troops in their attack against the powerful Union position along present-day Battleline Road and Tour Stop 2. Around 10:00 am a fellow Kentuckian - a sharpshooter from the 15th Kentucky Infantry in the Union Army - took aim. His shot mortally wounded Helm who died the next day.
When casualty reports began to trickle into Washington, DC, President Lincoln was distraught at the loss of Helm. Although they were enemies in war, they were family in peace. Lincoln invited Helm's widow Emile to the White House, where she stayed with her family, despite vicious attacks from the press. Emile Helm later recalled, "Mr. Lincoln in the intimate talks we had was very much affected over the misfortunes of our family; and of my husband he said, ‘You know, Little Sister, I tried to have Ben come with me. I hope you do not feel any bitterness or that I am in any way to blame for all this sorrow.’ I answered it was ‘the fortune of war’ and that while my husband loved him and had been deeply grateful to him for his generous offer to make him an officer in the Federal Army, he had to follow his conscience and that for weal or woe he felt he must side with his own people. Mr. Lincoln put his arms around me and we both wept.”
After a short time, Emile returned south, and became active in the efforts to memorialize her husband and other fallen Confederates. Like her sister Mary, who was widowed by John Wilkes Booth's assassination of Abraham Lincoln, Emile Todd Helm never remarried. 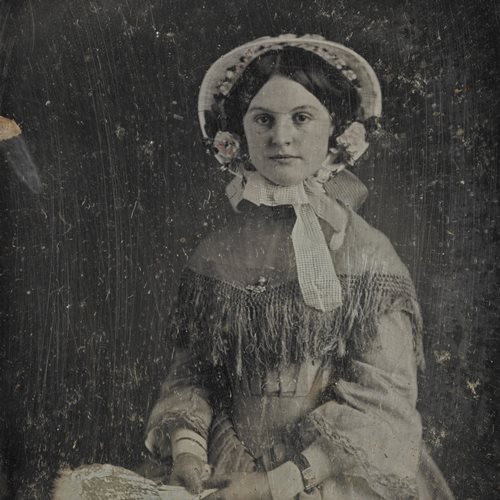 Emile Todd Helm, around the time her her marriage to Benjamin Helm 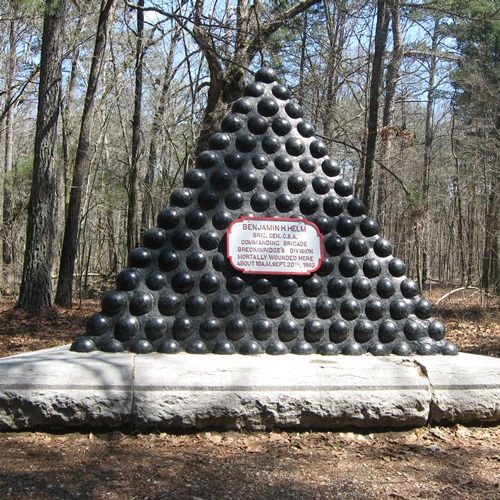 A monument of stacked cannonballs marks the spot where Helm was wounded, just across the street down the red trail.