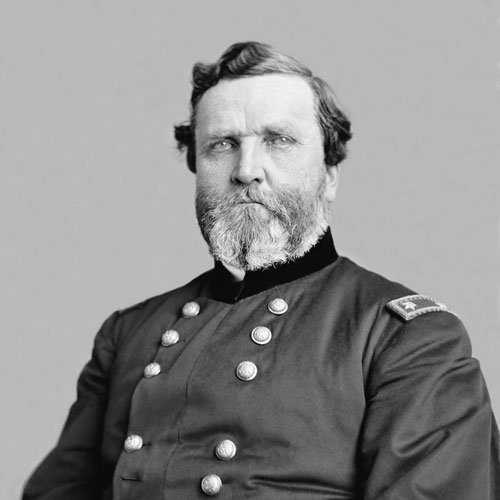 As commander of the XIV Army Corps at Chickamauga and commander of the Army of the Cumberland at Chattanooga, Major General George H. Thomas played a prominent role in the Chattanooga Campaign. Born into a large slave owning family in Southampton County, Virginia, Thomas displayed talent that earned him a cadetship at West Point, where he graduated in the Class of 1840, ranking twelfth in a class of forty two cadets. His pre-Civil War experience included garrison duty at Forts Moultrie and McHenry, combat experience during the Mexican-American War, where he served as a lieutenant in Captain Braxton Bragg's Battery E, 3rd US Artillery, becoming close friends with his future foe. With peace, Thomas saw service in Florida before being appointed to teach cavalry and artillery tactics at the United States Military Academy at West Point in 185,1 largely due to a recommendation from Bragg. Thomas had a number of his future subordinates and foes as students there and became close to the Academy's superintendent, Robert E. Lee. While at West Point, he also met Frances Lucretia Kellogg, from Troy, New York, whom he married in 1852.

Thomas returned to the field in 1854, being transferred to California where he was appointed a major in the newly created 2nd United States Cavalry, once again due to a recommendation from his old friend, Braxton Bragg. Thomas renewed his friendship with fellow Virginian and second-in-command of his new regiment, Lieutenant Colonel Lee. Thomas saw action against the Comanche, and during this conflict, he received his only wound, being struck by an arrow in his chin and chest in a skirmish along the Brazos River in August of 1860. Upon his recovery, Thomas asked for a leave of absence. It was during this time that he faced one of the most difficult decisions of his life, whether to stay true to the United States Army or join many other Southern officers in resigning and offering their services to their home states as they left the Union. Thomas's decision ultimately resulted in members of his family disowning him.

Thomas stayed true to the Union and was appointed brigadier general of U.S. Volunteers, organizing and training Kentucky and Tennessee volunteers at Camp Dick Robinson, Kentucky. He won the first major victory for the Union in the Western Theater at Mill Springs, Kentucky, on January 19, 1862. Promoted major general of volunteers in April, Thomas participated in subsequent battles and campaigns in 1862 that included Corinth, Mississippi, Perryville, Kentucky, and Stones River (Murfreesboro), Tennessee.

As the Chattanooga campaign unfolded in the summer of 1863, Thomas' corps marched over the Cumberland Mountains and crossed the Tennessee River at Bridgeport and Stevenson, Alabama, in late August, early September. At Chickamauga, Major General William S. Rosecrans, commander of the Union Army of the Cumberland, gave Thomas the responsibility for defending the left of the Union line and the LaFayette Road, the crucial road leading north to Chattanooga. As one-third of the Union Army, including Rosecrans, retreated north toward Chattanooga on the second day of the battle, Thomas took command of the remaining Union troops on the field, organized them, and successfully defended Snodgrass Hill and Horseshoe Ridge. His defense permitted the safe withdrawal of the Army of the Cumberland to Chattanooga and earned him the nickname "Rock of Chickamauga."

When Rosecrans was relieved of command in October, Thomas was appointed the new commander of the Army of the Cumberland. It was Thomas's army that broke the two month siege of Chattanooga by scaling the heights of Missionary Ridge on November 25, 1863, and routing the Confederate left and center. In 1864, he participated in the Atlanta campaign and oversaw the defense of Nashville, where he defeated the army of his former pupil, John Bell Hood, in December of 1864. This victory earned him the thanks of Congress.